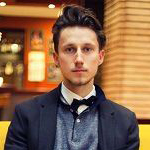 Andrius Romaška is an Academic Assistant with a focus on Digital Technology at MPC. Andrius has started his academic journey from BSc in Mathematics at Vilnius University (Lithuania). At the same time, Andrius was spending his summers at Glasgow College of Piping (currently known as The National Piping Centre) where he was learning to play the Scottish Bagpipes. Therefore, he has chosen to merge both areas of interest - music and mathematics, by choosing to pursue for the MA in Electronic and Computer Music at University of Leeds (United Kingdom), which he successfully did in 2018.

Andrius has been applying all of his digital and programming skills gained during the studies while working at UK music industry - Andrius has worked as a developer at the company NUGEN Audio for almost three years. This was followed by the position of 'Educational Applications Developer' at University of Oxford. Andrius carry on to experiment with the digital tools both - inside and outside the academic world.