Philip Martin will present his new book on how farm workers are becoming more important and more vulnerable in US agriculture.

The Prosperity Paradox highlights the fact that shrinking farm workforces include a higher share of hired workers who are more vulnerable than ever before. There are three reasons for agriculture’s increasing reliance on vulnerable farm workers. First, as agricultural employment declines, hired workers become more important on the fewer and larger farms that account for most farm production. Second, most farm workers are employed seasonally at relatively low wages. Earning half as much per hour as nonfarm workers, and working half as many hours a year, gives seasonal farm workers a quarter of average annual nonfarm earnings. Third, hired farm workers include local workers who have difficulty finding nonfarm jobs and immigrant workers without other job options. Farm worker vulnerability is compounded by the growing role of labor contractors and other nonfarm intermediaries. A third of all workers on US crop farms, and over half in California, are brought there by nonfarm employers rather than hired directly.

The Prosperity Paradox explains how farm workers are becoming more important and more vulnerable in US agriculture. ILO standards, labor laws, and unions set aspirational goals to protect farm workers that are not fulfilled in practice. New approaches to farm worker protection, such as fair-trade certification and buyers who require their suppliers to have their labor practices audited, have limited footprints. It concludes that investigation and audit approaches to protecting farm workers fails to guarantee continuous or motion-picture compliance with labor laws. The best models for continuous protection can be borrowed from food safety and workers compensation. Externalities, as when spinach tainted by E Coli reduces demand and prices for all spinach growers, provides to cooperate to implement effective food safety programs. Workers compensation adjusts employer premiums to reflect worker injuries, prompting private insurers to help employers to maintain 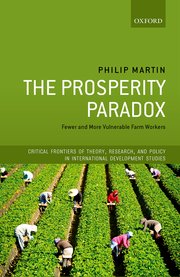